The things people throw away!

Last week I was shopping for a day with friends in Michigan. We had a fantastic time. Sadly on the way home my truck was hit by a random stone and a chip was placed firmly in my windshield.
It was small enough that it could be filled (yes I have experience with stone chips)
So finally on Friday of this week I was able to get in and have it repaired..when I say finally I mean I finally remembered to call and set up and appointment. :)

So being me, I don't go out and get one thing done. I make a list of all the stuff I have to run around and do while I'm out. Thus hopefully making more time for me to work on my stash/stuff of things in the garage...aka my workshop :) After getting the chip repaired, I wanted to head to this great shop in town that sells all sorts of handles/knobs and quite a few other things I don't really need but sometimes want :) I'll post about that store another time.

On the way there I was detoured to the junk store I often go to if for no other reason than to get ideas. This place is wayyyyyyy better than any other local thrift store. As I headed down on of the side streets to the junk store (I can't call the store by name because it simply has a sign on the side of the road that says "garage sale" No other name in sight)
Where were we?...right, side street. I almost had a heart attack when I noticed a pile of furniture on the side of the street. YAY! Ok, maybe not yay..this stuff looked heavy and it was just me. I had to stop anyway to get a better look at the stuff these people were clearing out.
As I was getting a better look a guy across the street offered to help me load it up. Great, now I had to decide in a hurry which pieces I wanted and would they fit in the back of my SUV..aka..truck. I quickly picked out two dressers and crossed my fingers they would both fit.
With a bit of maneuvering they did..YEAH!!
Then off to the knobs place, and home...oh and a quick stop in at the junk store...more about that in another post.
Want to see what I picked up? 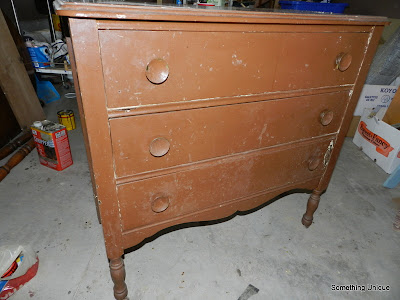 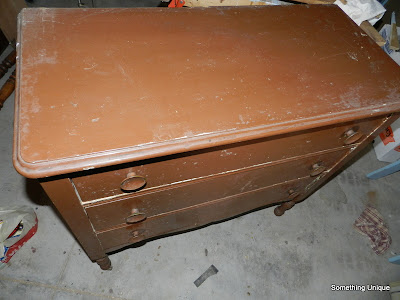 I just knew there was something special under all that ugly ewwwy paint. It was solid and really other than the paint it seemed like it was in pretty good shape.
So after getting everything done that I needed to do, I set to work on this baby.
As I started to strip it down I noticed the grain in the wood was getting to me. I just couldn't paint it. I had to restore it. There were NO major flaws. No veneer so no veneer missing.
I tossed those horrid knobs and because I picked this up BEFORE hitting my knob store I had already purchased replacements for it.
It took a bit of time...ok, a day and a bit, but I got it done.
I used my trusty Walnut stain (turns out this wood is actually walnut)  :)
And here she is! 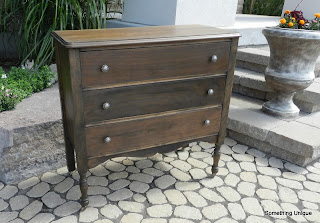 See why I didn't want to paint it? 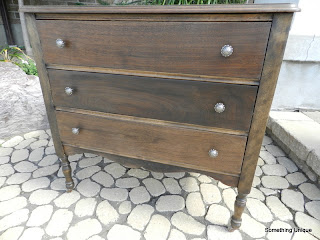 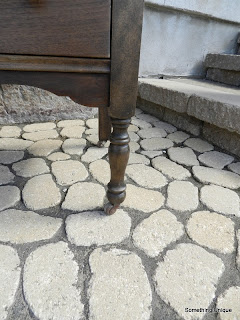 Even the casters were on this little lady. :) 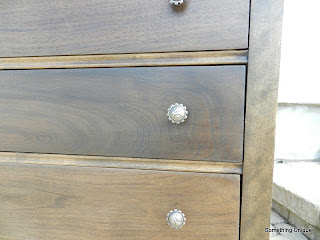 Just look at that sweet wood :) 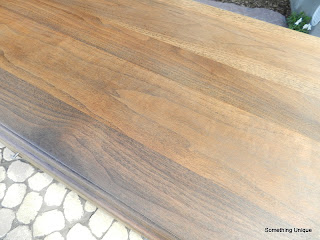 Can you believe someone covered this up? 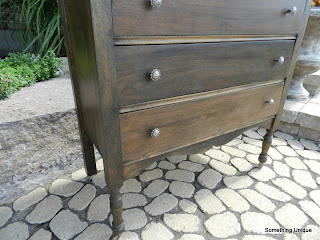 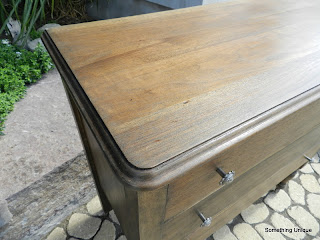 Ohhh the things people throw away!