Sweet new to me table!

I love antiques!
Seriously addicted!
Painted, or restored, it really doesn't matter to me as long as it has the right lines.
And legs..I'm so addicted to the right legs.
Case in point. I responded to an ad on kijiji that did not have a picture. The person said that they had pictures on request. So I thought, what the heck..send me a pic. And this is what I got. 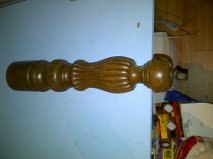 Thats it. He told me that it was a "project" table. I was getting more excited by the min. I agreed to "take it off his hands" After all he was giving it away for FREE! Yes you heard that right!
As soon as we set up a time for me to come, it started to snow. We have had an amazingly mild winter so far..so for this to happen now..unreal. I didn't care. I have great snow tires on my SUV.
Off I went.
The traffic was horrific! I think people totally forget how to drive in snow. What would normally be a 20 min drive took me 1 hour 50 min! I just hoped and prayed this table was worth it. I had a good feeling about it...but you just never know right? 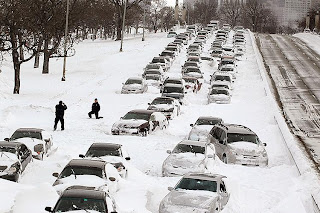 ok...so the storm wasn't this bad, but at times it felt like it. After all this is Canada right?
(btw, this pic is of lakeshore rd in Chicago during a storm last winter)
So I finally get there and it's an old house, like a hundred years old. I'm also a sucker for old homes.
He asks me to meet him at the side and we go in to this little landing. You know the kind. One side goes up a few steps to the kitchen and the other side goes to the basement. (I'm trying to prepare you here)
He says it's in the basement. No problem, I've been in lots of old homes. I know what to expect right? Cement floor, damp etc. Ummm close...really close, except this basement had no stairs! Seriously..lol
There was just a hole in the wall and a step ladder down to the basement. I kid you not. He explained he was in the middle of renovations. OMG..I hate heights.I don't do well with ladders. But this wasn't a 9 foot ceiling..so I thought what the heck and down I climbed. Phew..made it.
Cement floor and tons of "stuff". Off in the corner was the table! 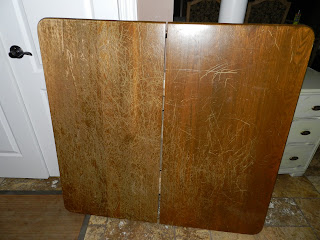 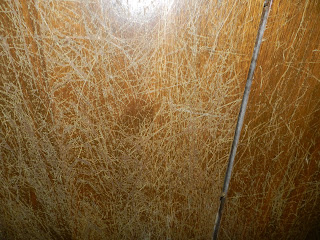 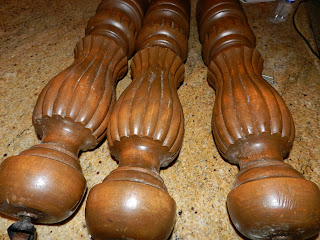 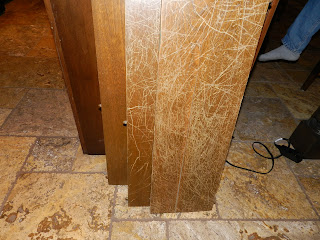 I don't have a pic of it at his house, but this is what I came home with.
Sweet eh?
Look at all the loving that table has seen. It came with the table, three leaves and five legs :)
Happy moment.
Now you must be thinking..how did we get that out of the basement?
Answer..lots of trips to the truck. Starting with the legs which probably weight 7-8 pounds each. Then the leaves. Up and down that step ladder. Then him standing at the bottom and me at the top and pushing and pulling the table top through this hole. It had to be turned on and angle to fit through the hole!
I didn't care obviously if it got scratched. After all I was going to strip it and sand it down anyway.
After getting my son to help me haul it down my stairs (of which I actually have stairs..lol) I started work on this beauty right away.
The legs got stripped and my wonderful husband set this up to make my life easier. 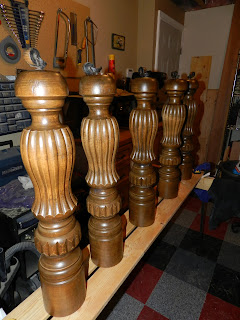 This pic was taken last night after I put the final coat of varnish on it. Sweet eh? I just love my husband :)
Then early this morning he helped me move it out to the main room in the basement so I could put it all together..and this is what I have ended up with. :) 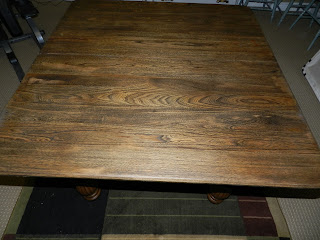 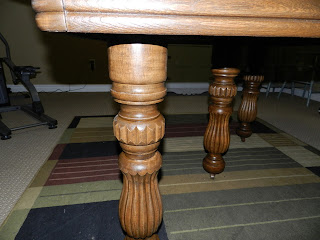 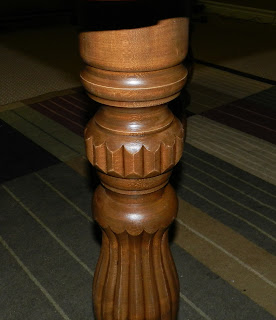 SWEET!
Now for the next part of the story. The couple who owned this table are renovating their house. HUGE job, the ceilings on the main floor have been removed and the rafters are all being reinforced with new wood. They are doing a great job, but it's a big job. They are also expecting their first baby in May of this year. While in the basement I noticed an old wood (antique, pretty pretty pretty) high chair. I asked him about it and he said his father used it as a child and he had used it as a child and he was hoping to "fix it up" before his child was born.
Sooooooo
I told him I would restore it for him for free. After all he did give me this table!
He has enough on his plate I think.
So next week, he will be bringing the high chair and I will repay a kindness shown to me.
Have a wonderful Thursday everyone :)
Posted by T. Emrich at 08:01